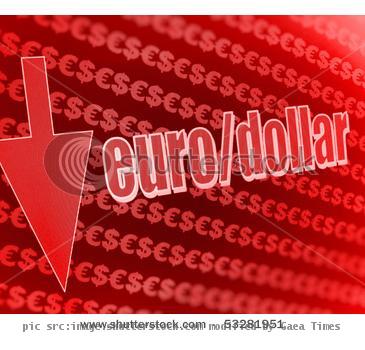 NEW YORK (GaeaTimes.com) — The dollar today was notably lower than the Euro and Yen. The data shows that even as the US services sector grew during the period on November, the factory order was conspicuous by its poor performance this October.

The heavy pressure on the dollar on Friday came just after a Labor Department report was released. That report showed that the US employment has hardly shown any signs of growth in November. Also the jobless rate was at a peak in a seven months period. Admittedly the investors are wary of investing at the moment following this revelation. The Recovery from what is the greatest recession in years is not yet on its tracks. According to many the pattern of Job Creation has improved quite a bit. The focus today is more on the basic materials and as a result the weaker dollar is quite expected.

ABU DHABI - Calling upon members of the Abu Dhabi Chamber of Commerce and Industry to develop joint ...

US teacher accused of having sex with student, 16, freed on 20K dollar bond

NEW YORK - A teacher in Texas, who was charged with sexually assaulting a 16-year-old student and is...

ABU DHABI - President Pratibha Devisingh Patil, who is on her maiden visit to the Gulf region, inaug...

WASHINGTON - The global initiative to eradicate polio could provide net benefits of at least 40-50 b...

WASHINGTON - Former US President Bill Clinton is auctioning a dinner with him to raise funds f...

What Tiger Woods' mistresses have been up to after scandal?

WASHINGTON - A look at the women who were linked to professional golfer Tiger Woods has revealed tha...