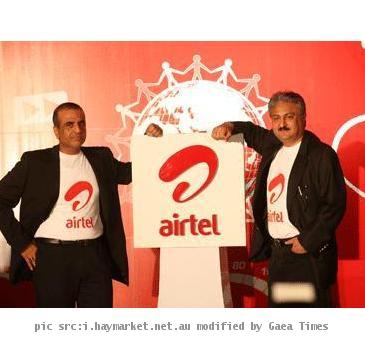 DELHI, INDIA (GaeaTimes.com)- Airtel which is the leading GSM mobile telephony service provider of India has recently changed its logo. The new logo for 2010 was unveiled by Sunil Mittal the chairman and MD of Airtel. This change comes on the heels of Bharti Airtel touching the 200 million user mark worldwide. As of now Airtel holds the position of the 5th largest mobile service operator of the world. The new logo of Airtel has been created by Brand Union which is a company based in London. Incidentally the same company also designed the logo of Vodafone the arch rival of Airtel.

The new design of Airtel logo retains the red and white color scheme which is familiar to the Airtel users. A press note released by the company says “The new curved addition to the logo is a symbol which will help ensure instant recognition across diverse international markets.” Music maestro AR Rahman has also refreshed the signature tune and the company expects the new music will be appreciated by the users. Airtel is also going to unveil its 3G network in India soon.

Airtel has also brought all its services under the name Airtel from the earlier Bharti Airtel. This re-branding is going to affect its global operations and the new logo creation is also a part of it. Its brands Warid Telecom in Bangladesh and Zain Telecom in Africa will also be re christened to Airtel. As one can expect Airtel would spend a lot in ads and marketing in the coming days and the web, radio and TV commercials would roll out soon.