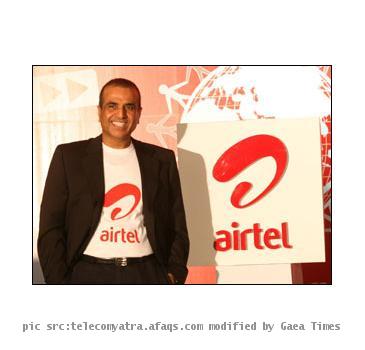 DELHI, INDIA (GaeaTimes.com)- After Tata Docomo it is the turn of leading GSM services operator Airtel to unveil its 3G network in India. It has won 3G spectrum in 13 circles in the country and it is going to introduce 3G services shortly in these areas the MD and chairman Sunil Mittal said in a recent interview. The 3g service of Airtel will be launched before 2011 the MD also added. Since rival Tata Docomo which priced its 3G services really cheap Airtel can not afford to keep the pricer for its own 3G services on the high side. The MD said “We will price our 3G services in a way so as to balance it to the investments that we have made in acquiring the spectrum and building infrastructure.”

The MD of Airtel admitted that the auction prices were steep but India is cost conscious nation and his company will offer really competitive tariffs. However, the CEO of Airtel for South Asia and Indian operations of Airtel Sanjay Kapoor said earlier this year that 3G services could be priced higher compared to existing 2G service. Before the entry of the private players in the race for 3G spectrum state owned MTNL and BSNL were the solo 3G service providers in India.

Airtel already offers 3G network services in 8 nations in Africa said the MD. It is expected to edge ahead of its arch rival Vodafone which is slated to roll out 3G services in India by the end of the first quarter of 2011. Recently Airtel also changed its logo and the signature tune as well.