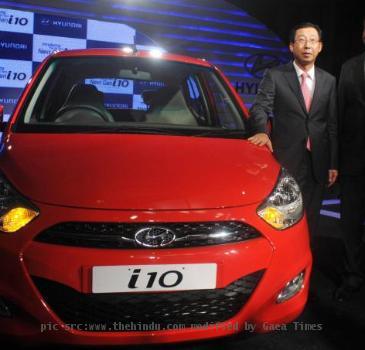 DELHI, INDIA (GaeaTimes.com)- Hyundai Motor India Limited which is one of the leading car makers in India has recently unveiled the refreshed version of its flagship compact car i10. The new hatchback has got a facelift and comes with a number of exciting new features. The move on part of Hyundai is predictable since a lot of other car makers are launching their hatchbacks and compact cars this year. The new model of i10 will be sold at a price of INR 3.49 lakh and the high end variant will be sold for INR 5.91 lakh. This makes it a tad costly than the existing model of i10. The new model will be shown in the Paris motor show which will open on October 2nd.

H.W.Park the CEO and managing director of Hyundai Motor India Ltd said that the Next Gen i10 is going to boost the brand image of the company in Delhi. The i10 made its debut in the Indian market three years back and it proved to be a runaway success with the buyers. So far Hyundai ha sold 700000 units of the car in the Indian market and despite the launch of several compact cars its demand has not been majorly affected till date. Its demand in overseas market is also good.

Hyundai Motor India Limited is upbeat about the new model and it is going to be made available in all major metros in India. The company has claimed that all variants of the new i10 will deliver excellent mileage. It expects to sell near about 15000 units of the new car per month.