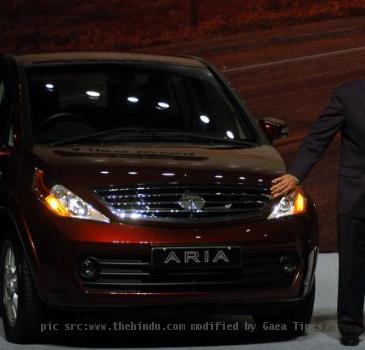 MUMBAI, INDIA (GaeaTimes.com)- Leading India based car maker Tata Motors unveiled its much touted crossover car Aria on Monday in a ceremony in Mumbai. It is a cross between a sedan and SUV, a has been claimed by the company. The car scores high on both styling and performance says Tata Motors. All three variants of the model are 4×4 and the Aria Pride is the high end model. Each of the models come in 8 attractive colors. As of now the customers can get the car in 25 cities in the country. Later it will be made available in various other places through the wide network of Tata Motors. The pricing is lucrative compared to the existing and popular SUVs in the India market. Depending on the variant the models of Aria will cost between INR 12.86 lakh to INR 15.85 lakh.

The Tata Aria is the first in its segment to offer in built GPS navigation system. It also offers state of the art ESP or electronic stability programme and six airbags for offering optimum safety level to the passengers. The car is powered by a beefy 2.2 litre DICOR engine which makes driving in rough and hilly terrains a cakewalk. Carl-Peter Forster the MD and CEO of Tata Motors said at the launch of the model that the company has paid attention to the interior of the car as well. It has been conceived and created in India totally.

Tata Aria will offer stiff competition to the SUV rivals from the rivals like Hyundai, Ford and Toyota. It also complies with the latest Euro 4 standards.