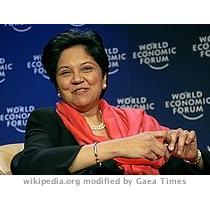 NEW DELHI, INDIA (GaeaTimes.com)- Indra Nooyi, the chairperson and the Chief Operating Officer of PepsiCo Inc. has brushed away all speculations that she is one of the front-runners in succeeding Ratan Tata, the chairman of the Tata Group. Indra Nooyi was being pitched as one of the contenders for replacing the Tata group chairman after the company had made the announcement earlier this year that Ratan Tata would be retiring from his duties as the chairman sometime next year. However, the PepsiCo Inc. CEO has refuted the claims saying that she is not on the race as she enjoys her current job.

While talking to a leading news agency, the 54-year-old global business leader clarified all the rumors about she being one of the prospective successors of Ratan Tata saying that she loves her job and is already busy heading one of the biggest companies all across the world. At the same time, Indra Nooyi had only words of appreciation for the Tata Group chairman whom she described as an ‘unbelievable person’ while also pointing out that he had a talented stable of people who are competent enough to succeed him. Moreover, the PepsiCo Inc. chairman had only good things to say about Tata Group calling it the ‘nation-building enterprise,’ ‘face of India’ as well as a ‘phenomenal company.’

Apart from Indra Nooyi, the other executives who are speculated to be the successor of Ratan Tata include his half brother Noel Tata as well as Carlos Ghosn, who happens to be Renault-Nissan Alliance’s Chairman and Chief Executive Officer.