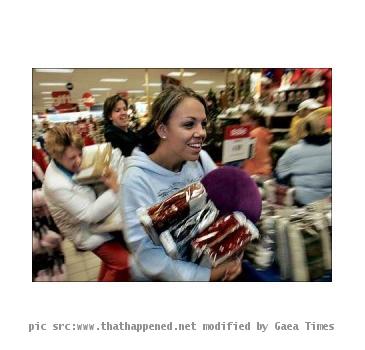 SAN FRANCISCO (GaeaTimes.com)- As Black Friday is drawing closer the giant US retailers are leaving no stone unturned to reach out to the buyers with their lucrative offers on Black Friday. Target which is among the top retailers has come out with a plethora of attractive deals for Black Friday and the ad is making waves among the buyers. The retailer is offering plum deals on home appliances and popular gadgets on Black Friday which is sure to lure the gadget lovers. Target outlets will also offer popular PC and console games at slashed prices on Nov 26th as it has been reported.

Target is sure to witness huge footfall at its outlets across the USA since it is offering great deals on Apple products. The Apple iPod Nano is being offered at $145 while its bigger and more feature rich cousin iPod Touch will be sold for $225. The icing on the cake is that both the models will be sold with Target gift cards. Now this is an offer no gadget lover would like to miss. Those who are looking for buying a new TV can also scan the Target Black Friday ad. The best deal seems to be a 32 inch Samsung HDTV that is being offered for only $228. Those who are willing to buy new cameras can opt for the Nikon S205 and Canon SX120. The housewives should look for the plum deals on sandwich makers and toasters.

Target Black Friday ad has also been released on popular social networking platforms to reach out to the maximum possible buyers. The gift card offer is valid only from 4 am to 10 am.