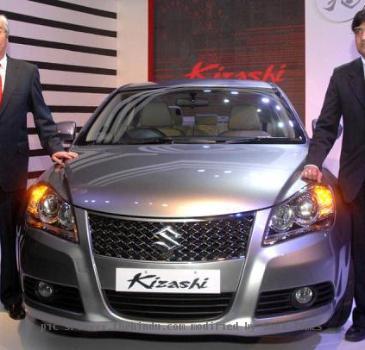 DELHI, INDIA (GaeaTimes.com)- Maruti Suzuki which is the undisputed leader in the compact car segment in India is leaving no stones unturned for grabbing a larger pie of the luxury sedan sedan market. While its compact cars like Alto, WagonR, Alto and Ritz sell like hot cakes in the entry level the company has failed to woo the buyers who prefer luxury sedans and SUVs. Its earlier offering in that segment aka Baleno met with lukewarm response. To take on the rivals like Honda Civic, Toyota Corolla Altis and Volkswagen Passat, Maruti Suzuki India has unveiled its high end sedan Kizashi in India. The company is also worried that a number of European and German rivals have offered new cars in the segment in recent times. At INR 1650000 it is the company’s most expensive car in India till date.

The MD of Maruti said “We understand that the market at the Kizashi’s segment is not too big now. But we anticipate that the numbers will become big in the times to come”. In the initial stage the car will be imported but later the unit will be built in the Indian plants of Maruti Suzuki the spokespersons said. The car will be launched in two versions- with automatic and manual transmissions. The car offers medium fuel efficiency. To book the Kizashi one needs to pay INR 50000.

The Kizashi was launched in Japan in 2009 and the next year it was unveiled in the US market as well. Maruti Suzuki however is in no mood to shift its focus from the compact car segment ion India which is its strength.

PATNA - Hundreds of people who had booked cars for delivery on Dhanteras day were left disappointed...

CHANDIGARH - Facing resentment of players over being payed much lesser amounts than their counterpar...

RAI - It was a day for the players from Haryana to seek assistance from others to walk away with the...
Copyright© 2011 The Gaea Times