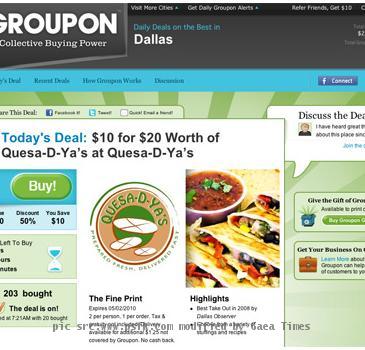 The rumored deal where Google is said to have purchased Groupon the deal-of the-day site may face antitrust security. The secretive $6 Billion planned buy out plan of Groupon was hinted by publications such as by the technology blog All Things D and by The New York Times.

According to the present situation as long as Google keeps buying they are making them selves more vulnerable to anti trust issues. That being said the federal review process can well be a long drawn out affair. The profitable Chicago Start up Groupon is localized to US and Canada to a greater extent. Sources suggests that Groupon will surpass $ 500 million in earning this year. After the rumors Google’s shares rose by 1.6 percent Wednesday and closing to $564.35.

Speculations are there since at the present situation that Google may well be on the way of becoming a modern epitaph of a Monopolistic economy thus giving rise to such paranoia in the Market. meanwhile at least three Asian Countries active in Taiwan, Hong Kong and Singapore will be brought into the Groupon umbrella in the following months.

NEW DELHI - Transgenders are at a higher risk of contracting HIV infection, said a UN report on AIDS...

PATNA - With the counting of votes for 243 Bihar Assembly seats scheduled for tomorrow, Chief ...

Super-speciality hospital to come up in Himachal