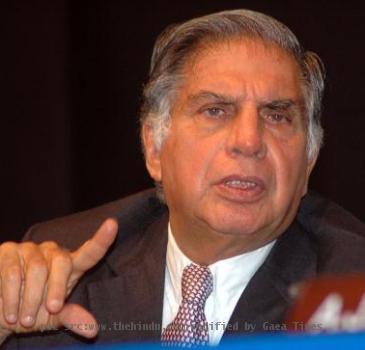 more images
NEW DELHI, INDIA (GaeaTimes.com)- Rajya Sabha MP Rajeev Chandrasekhar was at the receiving end of Tata Group Chairman Ratan Tata’s rebuke on Thursday when the latter brushed away all speculations that the Tata Group was the company that ripped the most profits from the dual technology policy of the government. In a letter to the Rajya Sabha Member of Parliament, the Tata Group supremo refuted all the allegations that were levied against him and his company by Rajeev Chandrasekhar according to which Ratan Tata’s company was most benefited from the dual technology policy.

In his response to Rajeev Chandrasekhar’s letter, the Tata Group Chairman lashed out at the Rajya Sabha MP saying that his allegations seems to have stemmed from his close association with the BJP. At the same time, Ratan Tata also hinted that Rajeev Chandrasekhar’s allegations might also be an initiative to embarrass the ruling party as well as Prime Minister Dr. Manmohan Singh. Emphasizing that the Rajya Sabha MP and many other are driven by nothing else but self interest, the Tata Group chief alleged that they were lobbying through Cellular Operators Association of India (COAI). In the letter, Ratan Tata also divulged that Rajeev Chandrasekhar had contacted him in July, 2002 as he was working against a technology neutral policy and wanted him to sign a letter over this matter.

Apart from slamming Rajeev Chandrasekhar, the Tata Group supremo also had harsh words for BJP as he stated in the letter that all the ‘flip-flops in the telecom policies’ took place when BJP was in power while pledging his support to the government telecom policy.

Super-speciality hospital to come up in Himachal

Transit to Indian goods through Bangladesh won't be free

DHAKA - Bangladesh will not give free transit for taking goods from one part of India to another, sa...

NEW DELHI - Police officers and personnel deputed for security duties at the Talkatora Stadium for t...

NEW DELHI - Big corporate houses are set to hit the Delhi roads with world class buses that have aut...
Copyright© 2010 The Gaea Times