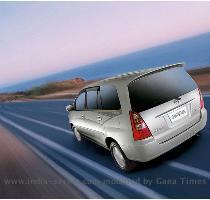 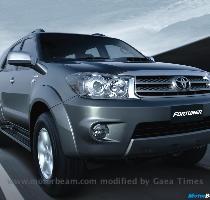 DELHI, INDIA (GaeaTimes.com)-Toyota Kirloskar Motor Limited which is a section of Toyota Motor Corporation of Japan is increasing its production capacity in its Indian plant. The new capacity is 80000 units a year up from 73000 units. It has said that it wants to double the car sales in India in 2011. In 2009 the company sold approximately 51000 units and in 2010 the figure went up to 73000 units. The company is cashing heavily on its recently unveiled entry level sedan Etios which is targeted at the contenders like Maruti Suzuki Dzire Swift and Tata Indigo Manza. The car manufacturer which is struggling to cope up with its series of recalls in USA and its homeland has suffered little in India so far.

As of now Toyota Kirloskar Motor Limited India makes models like Fortuner, Innova and Corolla Altis at its plant in Bangalore. The Fortuner is a premium SUV and Corolla is its flagship sedan. It also imports other popular models like Land Cruiser, Prius, Camry as completely built units. The production of the much hyped Etios has started and it will be launched commercially in the market in next year said the company. Initially Toyota will focus on selling the Etios in the domestic market and possibly in 2012 it can be exported to other countries. Toyota also thinks that the car will be lapped up by the Indian buyers as it offers a nice blend of price and performance.

Toyota India will increase its employee strength to meet the increased sales target it has set for future. Later a hatchback model of Etios will also be unveiled.

Man rams car into own house after argument

MELBOURNE - An Australian man rammed his car into his home and allegedly injured a police officer af...

The demand for hybrid cars is increasing day by day as more and more people are becoming environ...

How Mobile Car Apps Tend to Change the Way you Drive??

With the days passing by, it happens such that smartphones no longer are the only devices where ...

LONDON - Automobile giant Toyota Thursday announced a recall of around 12,000 vehicles in Britain be...

ITC Maurya taken over by US security