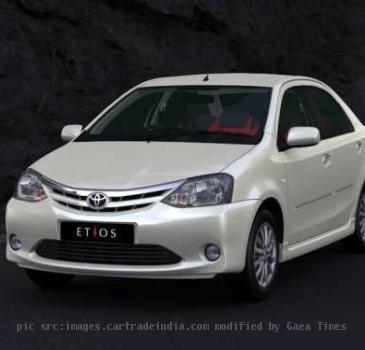 BANGALORE, INDIA (GaeaTimes.com)- Today is going to be a landmark for Toyota motor Corp in India. The Japanese car giant is going to launch its much talked about small car Etios in Bangalore in India. Toyota has witnessed a slower growth in India compared to other countries and in India it has focused on bigger cars and SUVs so far. Toyota however considers India as an important, market and that explains why it has not deviated from its plans with Etios launch despite the global recall fiasco that troubled it throughout the year 2010. The President of Toyota will come to Bangalore for the debut of the model as it has been reported. This indicates how important the launch is for Toyota. With Etios Toyota wants to improve its position in Indian car market.

In India Toyota holds just 2.8 percent share of the market. It is willing to invade into the small car market which is largely dominated by rivals Maruti Suzuki, Hyundai and Tata Motors. The Etios strictly speaking is not a compact car and it will take on small sedans like Suzuki Desire, Tata Indigo and Hyundai i20 etc. Toyota kept the car under development for a number of years and finally it is going to see the light of the day.

The Indian car industry veterans are saying that it is hard to say whether Toyota Etios will have a significant impact on sedan sales. Toyota has a reputation as a reliable and sturdy car maker and its sedans sell in god numbers in India. However, the small sedan market has a lot of worthy contenders already.

Man rams car into own house after argument

MELBOURNE - An Australian man rammed his car into his home and allegedly injured a police officer af...

The demand for hybrid cars is increasing day by day as more and more people are becoming environ...

How Mobile Car Apps Tend to Change the Way you Drive??

With the days passing by, it happens such that smartphones no longer are the only devices where ...

LONDON - Automobile giant Toyota Thursday announced a recall of around 12,000 vehicles in Britain be...

ITC Maurya taken over by US security