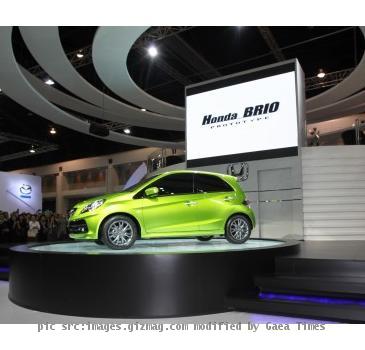 BANGKOK, THAILAND (GaeaTimes.com)- The speculation about Honda, the Japanese car maker unveiling its small car has turned out to be true. The rumor that Honda is planning to launch a small car aimed at the Asian market where rivals like Maruti Suzuki and Hyundai dominate the small car market, turned out to be reality. Honda’s attempt at coming out with a car smaller than sedan but bigger than compact car, namely Jazz has got moderate success so far. It is clear that it wants to grab a pie of the fast growing small car segment in the Asian sub continent. The newly unveiled concept car named Brio is a step in that direction, as the car industry veterans feel. The prototype was shown in recent times at the Thailand International Motor Expo in Bangkok where it drew rave reviews.

The company said that Honda Brio is going to be the cheapest, lightest and smallest car from its stable in the Asian market. It will be sold in 2011. The average price of the car is expected to be around USD$13,300. While the model shown at the 27th Thailand International Motor Expo 2010 is meant for Thai market, the Indian variant will not be much different. It is going to be showcased in India in January 2011, Honda has revealed.

Honda Brio will have latest technologies and it is targeted at the urban users. The car is compact but Honda has designed it to offer optimum cabin space. The company has also said that the model will be fuel efficient. It will also conform to the latest emission norms of the countries it will be released in.

Sensex holding on to gains in noon trade

MUMBAI - A benchmark index of Indian equities market managed to hold on to most of its early gains i...

SHIMLA - A common effluent treatment plant will be set up at a cost of Rs. 80 crore in the Baddi-Bar...

MUMBAI - A benchmark index of Indian equities closed 153 points higher Monday on the back of last ho...

SAN DIEGO (GaeaTimes.com)- Biker Ramirez, one of the members of the Saddletramps Motorcycle Club...