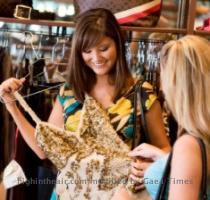 SAN FRANCISCO (GaeaTimes.com)- Black Friday sales follows the Thanksgiving Way. It marks the beginning of Christmas shopping season. Therefore, like every year, most of the retail stores have opened early to offer promotional sales and kick start the shopping season in full spirit. However, these days, the Black Friday Sales are not limited to stores but it is also seen flocking the internet.

Kohls is offering more than 400 bids online on clothing, seasonal items, housewares. The same strategy has been adopted by Walmart too. Some of the Walmart stores in Las Vegas will remain open for 24 hours. The customers can save up to 25% at American Eagle, up to 40% at Express, up to 50% at Ann Taylor store. Most of the shops that started early today are Barnes & Noble, Mesilla Valley Mall, at 6 a.m, Walmart, Best Buy, Kmart at midnight and 5 a.m in certain places, J.C. Penney, Sears, Target at 4 a.m, Harbor Freight at 7 a.m and Dillards at 8 a.m. Toys R Us opened at 10:00 pm. However, it witnessed the craziest crowd in front of the stores, that started forming from 7:00 PM. Most of them were the passers-by and tourists, who came to know about the 150 doorbuster deals on a range of goods from iPods to dolls for Black Friday Sales.

According to a survey by the National Retail Federation, more than 18 million people nationwide said that they shop from the stores that were open on thanks giving Day. “Black Friday” indicates the time, when the retailers are turning a profit or “in the black”. Black Friday Sales are therefore a huge determinant of the yearly fortune of the retail stores in America.