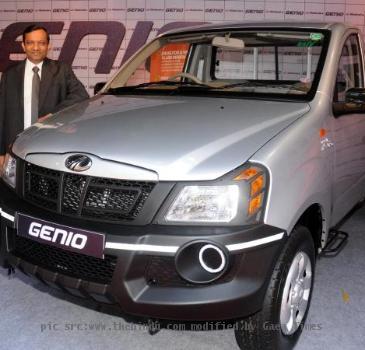 MUMBAI, INDIA (GaeaTimes.com)- Mahindra & Mahindra which is one of the leading commercial car manufacturers of India has launched Genio its new commercial vehicle. The new 1.2 tonne pick-up trick is targeted at the small to mid sized business segment. The BS3 version of the model is priced at INR 499000 and a BS4 version is also available. The vehicle is powered by a capable 75 hp CRD engine. A senior M7M official said that in near future the company will launch a number of vehicles on this platform. Pawan Goenka the president of the company’s Automotive and Farm Equipment segment told the media “This is just the beginning. You will see (going forward) a fairly high frequency of launches from M&M this year. And in the coming year, you will have a few more from this platform”.

The President also said that from Mahindra Genio the buyers can expect the usability of a powerful pick up vehicle and convenience of a passenger car. He also added that the company has spent close to INR 200-225-crore in the manufacturing and design of the model. Within a few months the model will also be made ready for export. As of now the company holds 75 percent share in the pick up segment in India. The company did not launch any new car in this segment for quite some time. The Chief executive of Mahindra & Mahindra’s Automotive Division, Rajesh Jejurikar thinks this year this segment will witness double digit growth.

Mahindra Genio is available in 4 hues and one can buy it from 70 dealerships of the company. Later it will be sold from all outlets.

Mahindra to take over Ssangyong

MUMBAI - Mahindra Satyam, which was delisted from the New York Stock Exchange in September, said Mon...

With surplus rooms after Games, homestay tourism gets a boost

NEW DELHI - The hotel rooms were ready but not many guests showed up. To overcome the dismal flow of...