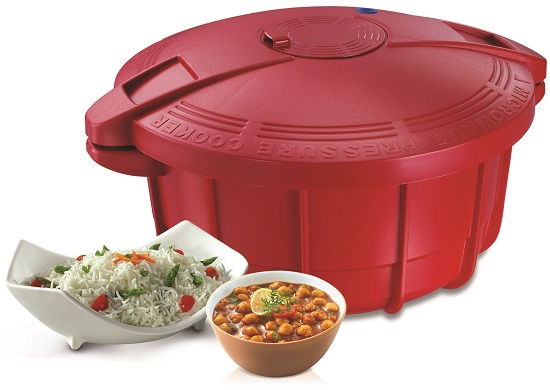 DELHI, INDIA (GaeaTimes.com)- TTK Prestige which is among India’s top kitchen appliance brands has unveiled a unique offering for health conscious buyers- the first ever microwave pressure cooker of India. Named Microchef the device is meant for those users who own Microwave ovens but do not use it for general cooking. S Ravichandran the MD of the company said that ‘Prestige has always been on top when it comes to consumer preferences and Microchef is one such product which was created to suit the growing needs of Indian women.” The company says that this cooker can cook up to 40 percent faster than regular vessels used in Microwave. With a device like these more Microwave users will use the device for cooking as the company expects.

The advantage of the new Prestige MicroChef is that it blends the advantages of pressure cooker and microwave and since it takes less time to cook food, the users also save on power bills. It also maintains the essential nutrients of food that is usually lost in conventional cooking. The product has been designed in such a way that the users can cook rice and sprouts simultaneously. Its superior quality plastic body keeps it safe from the heat generated inside the microwave.

The Prestige MicroChef is equipped with 2 safety features to make it really user friendly. The gasket offset device makes sure that if the user does not close the lids, the pressure does not build up. The pressure membrane regulator releases extra pressure when the cooking is going on. There is a visual pressure indicator and a safety plug as well. It is available in two shades.

BANGKOK - Aung San Suu Kyi's patience and fierce determination have been tested repeatedly during a ...

Although the Congress' decision to exclude Maharashtra Chief Minister Ashok Chavan from its election...

Microsoft has claimed its Internet Explorer 8 and IE9 browsers to have outgrown the usage share ...

ON AIR INDIA ONE - The Prime Minister, Dr. Manmohan Singh, on Saturday, defended his decision t...

NEW DELHI - Now this was a major faux pas - the tag outside fashion designer Malini Ramani's stall a...

Bankers got a kick out of the global recession, says academic

WASHINGTON - An academic at Cardiff University have said that the bankers who brought the global eco...

PM's word ought to be respected, says Gilani

ISLAMABAD - The prime minister's word should be "respected by everyone", Pakistan premier Yousuf Raz...

When PM says something, it ought to be respected: Gilani

ISLAMABAD - The prime minister's word should be "respected by everyone", Pakistan premier Yousuf Raz...
Copyright© 2011 The Gaea Times