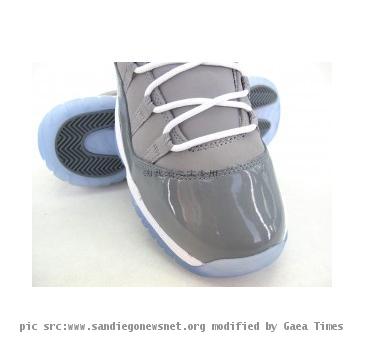 SAN FRANCISCO (GaeaTimes.com)- Ever since Nike announced that a limited edition Cool Grey 11 Retro Sneakers will be launched ahead of Christmas, the fans of stalwart former basketball player Michael Jordan were on cloud nine. The retro sneakers was launched on Dec 23rd midnight at some selected retail outlets which made thousands of buyers queue up in lines hours before the launch. The shoe launch however was not without its share of troubles. Nike made it available for sale at some outlets only for a day and given the fact the last time the model was sold was in 2001 the buyers made a mad rush to get their copies. The limited edition Nike Air Jordan sneakers were being sold at $175 at most of the outlets.

The shoppers who queued up outside the outlets selling the limited edition Cool Grey 11 Retro Sneakers got restless when some outlet staffs refused to let in more than a certain number of people at a time. In some places this led to chaos and unrest. Round Rock Premium Outlets had to call in the cops to handle the irritated crowd and the staffs couldn’t calm them down. Eric Poteet on behalf of Round Rock police said that “The store was hesitant to allow 100 people in all at once, and some in the crowd got angry and started causing problems.” The cops had top detain some people there but finally no one was taken into custody.

The sale of the limited edition Cool Grey 11 Retro Sneakers also caused trouble in the Northline Mall as well as Deerbrook Mall. The other places selling the shoes did not face any major problem.

LOS ANGELES (GaeaTimes.com) -- The eleventh season of "Dancing with the Stars" is on the verge t...

WASHINGTON - Astronomers have discovered a unique and exotic star system with a very cool methane-ri...

WARSAW/OSLO - The Nobel committee Monday was cool to an offer by former Solidarity leader Lech Wales...

Organic farming meet to be held in Gujarat

VADODARA - Organic farmers from all over India will converge in Anand district of Gujarat next month...

Gunny Dwooz is a funny cartoon shooting game. There are 10 levels with cool and funny targets, help ...

Not only that she looks fabulous and gets to wear so many super clothes, but this girl surely knows ...
Copyright© 2010 The Gaea Times