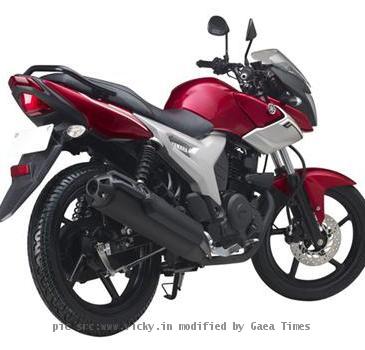 DELHI, INDIA (GaeaTimes.com)- Noted Japanese two wheeler maker Yamaha Motors recently unveiled one mainstream and one high end bike in India. The costlier FZ1, with a 998cc engine is targeted at the buyers who want a powerful sport bike and do not bother about shelling out a price that can fetch a mid level sedan. The company has also launched a mainstream bike named SZ R in India. The latter has a 153 cc engine. Mr. Hiroyuki Suzuki, the MD and CEO of Yamaha Motor India said during the launch event “Yamaha offers innovative designs, sporty looks and premium features across models as part of its strategy to give consumers a new thrill in biking.” He also added that India is always going to be a key market for Yamaha. He said tat a section of buyers now want expensive and powerful bikes and the FZ1 is aimed at them.

The Yamaha FZ1 is quite popular in Europe. It will be sold in White and black hues said the CEO. The Yamaha 153cc SZ R which is targeted at buyers looking for a classy and stylish mainstream bike has a number of features. It comes with tank guard, tachometer and front disc brake. It is going to be sold in three colors- Quality Blue, Quality Red and Quality Black. The price of this bike is INR 55,500. The high end FZ1 costs a whopping INR 870000. Clearly this would be out of reach for the majority of motor bike users in India.

Even though Yamaha is not the leading bike maker in India it witnesses robust sells across mid and entry level buyers and wants to strengthen its position in near future. It also wants to taken on the new bikes announced by rival Bajaj motors with SZ R.

LONDON - Japan has a new pop sensation and she can perform anywhere and everywhere, reason for...

CHENNAI - Krishnan Rajini, in the Red Rooster Racing livery, will become the first Indian ever to pa...

NEW DELHI - Janki Kapoor, a mother of three, is so busy with her household chores that she has no ti...

MUMBAI - Bollywood actor John Abraham, who has been sentenced to 15 days in jail in a rash and negli...

LONDON - A life-sized female robot, known as HRP-4, has been taught to sing just like a real pop sta...

LONDON - They can drive cars and probably even do household chores like humans, but a bizarre fe...

India go down 0-1 to Thailand in international friendly

BANGKOK - The Indian football team suffered a 0-1 loss against Thailand in an international friendly...

Rajini's fifth win in a row in national racing

CHENNAI - Krishnan Rajini of Red Rooster Racing yet again underlined his dominance in the premier cl...
Copyright© 2010 The Gaea Times