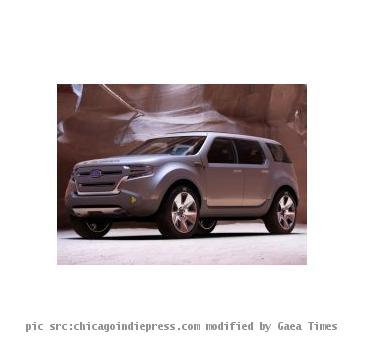 SAN FRANCISCO (GaeaTimes.com)- Ford one of the leading automakers in the USA is delighted because its flagship SUV the Ford Explorer 2011 has been picked as a model with Top Safety Pick Designation by the Insurance Institute for Highway Safety. The SUV did extremely well in various types of crash and impact tests. The model will reach the US based Ford dealerships in January next year, as industry reports suggest. The Explorer 2011 has a lot of state of the art safety features which make it a category killer of sorts. The top safety features included in the car are dual front airbags, adaptivecruisecontrol, stability and traction control, Rear-seatinflatable seat belts etc. The company said in a statement that the car has unprecedented safety level and the win has not come as a surprise.

If the pre-release demand is an indication then it can be safely said that the Ford Explorer 2011 has all the elements to emerge a winner. In fact the SUV has generated so much buzz before its commercial release owing to the fact that it has the features of a sedan even though it belongs to a separate category. This year 66 models earned the Top Safety Pick award including a minivan and 40 cars. The selected cars mostly feature collision impact control and electronic stability control. In 2009 this number was limited to only 27.

Apart from Ford Explorer 2011 the other companies that have won the award for their models include Hyundai, GM, Toyota and Volkswagen. Lexus owned by Toyota and Kia a Hyundai subsidiary also qualified for this award this year.

Malin Akerman to replace LiLo as Linda Lovelace in Inferno

LONDON - Troubled star Lindsay Lohan has received yet another blow - she has been dropped from playi...

NEW YORK - American fashion designer Tom Ford has chosen to pose with a 15-year-old model on the c...

The demand for hybrid cars is increasing day by day as more and more people are becoming environ...
Copyright© 2010 The Gaea Times