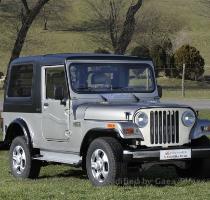 NEW DELHI, INDIA (GaeaTimes.com)- The much awaited utility car of the year has been launched today by Mahindra & Mahindra. This sports utility vehicle, named as Mahindra Thar 4X4, will first hit the market in Rajasthan and Kerala and later, it would be introduced in the rest of the nation.

Mahindra Thar 4X4, is expected to offer a huge competition to the dominance of Jeep Wrangler, as it would offer similar features like that of Wrangler at a much lower prize. This car is already creating a rave in the market all over Europe and South Africa, due the smooth ride it offers during the off-road journeys. Mahindra Thar would be the first non-commercial car to be launched by the company with a 2.5-liter along with a 78 kilo Watt and 2500CC turbo-diesel engine. It operates on the basis of Euro 4 emissions standards. The peak torque of the car would offer an impressive 247 Nm at 1800 rpm at its peak. The other important features that accounts for its looks are open style motoring and a removable hardtop roof. The double-action shock absorbers would facilitate a leaf-spring suspension. It also offers a 2-speed gear-reduction, along with an approach angle of 46 degrees and departure angle of 30 degrees to make the car all more tempting and hardy.

The automaker Mahindra & Mahindra Ltd. has earned a different position in the Indian market, as the only car manufacturer, that deals with mainly off-road hardy cars. Where most of its sedans could not create a popularity in the market, Mahindra Thar 4X4 is expected to be as good as its other multi-utility vehicles like Scorpio and Bolero. This car would cost something around Rs 6 to Rs 8 lakh depending on the other intricate features of its models.

Mahindra to take over Ssangyong

MUMBAI - Mahindra Satyam, which was delisted from the New York Stock Exchange in September, said Mon...

With surplus rooms after Games, homestay tourism gets a boost

NEW DELHI - The hotel rooms were ready but not many guests showed up. To overcome the dismal flow of...