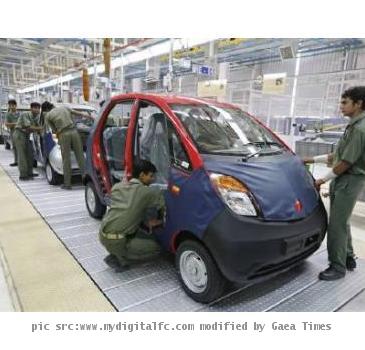 DELHI, INDIA (GaeaTimes.com)- After months of not so inspiring sales figure, Tata Motors is witnessing rising demands for its small car Nano. The car which set a cut throat competition among top car makers for coming out with a low budget compact car after its arrival, was plagued with a number of problems which affected its sales figure. However, things changed after Tata Motors announced a number of offers on the small car and also extended the warranty period a few months back. The sales in December was much encouraging than previous months and now it is available in mores states in the country. Therefore, the company has decided that it will hike the production capacity of the plants that manufacture Nano. The monthly production capacity will be increased to 9000 the company has said in a statement.

The sales of the small car Nano has also seen a hike because of new ad campaigns used by Tata Motors. A few weeks back. The company made Nano available in 874 outlets all over India. Tata Motors also implemented some change in the components and electronics mechanism of the car after some of the sold cars caught fire and its image was tarnished. The price of Nano which attracted a lot of buyers in the initial phase after its launch is no longer under the psychological mark. However, at INR 136000 it is still cheaper than any other 4 wheeler in the country.

Tata’s small car Nano also offers great fuel economy which is a boon for the value conscious buyers. The market buzz is that the company will bring out a new model of Nano.

TATA-owned Jaguar to hire 1500 for production jobs, more in the offing

DELHI, INDIA (GaeaTimes.com)- After Tata Docomo it is the turn of leading GSM services operator ...

This happens to be the European variant of Tata Nano, known as 'Nano Europa'. It made its debut ...