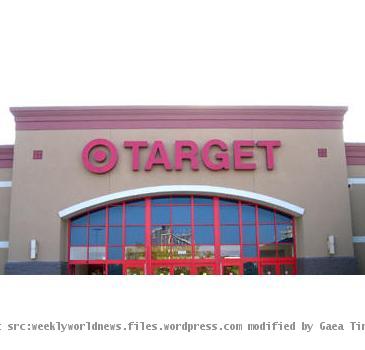 SAN FRANCISCO (GaeaTimes.com)- Target Corporation the US based retail giant is going for a change in its logo. The changing economy as well as volatile market could be the driving force behind the logo alteration. The move comes on the heels of the Starbucks logo change. A Target spokesperson named Barry Finkelstein said on this “Since we have so many Starbucks in our Target Stores, we only thought it best that we follow suit and change our logo as well.” However, the logo will bear some similarity with the older one so that the customers get a familiar feeling when they look at it. The text will no longer be there and minor design changes will be incorporated as the spokesperson said. This change comes at a time when Target Corp is mulling global expansion for its retail business.

The Target logo change comes also comes at a time when the company is planning to take on Wal Mart its arch rival in new markets. However, Target’s declaration that from now onwards it will sell and make a variety of weapons and guns have not gone down well with housewives and mothers. The logo change has created mixed reactions among the market analysts. Some have hailed the move while a few of the have scoffed at the brand.

In marketing history some big companies have benefited from logo change while others have suffered. Gap had to withdraw its new logo as users did not like it. The success of Target will depend also on new marketing strategies coupled with the change in logo. Target in sync with Starbucks has adopted the minimalistic approach in its new logo.

BRUSSELS - An Islamist terrorist cell planning an attack on Belgium was dismantled after 10 people w...

WASHINGTON - Scientists say that a new breakthrough in imaging technology using a combination of lig...

A pill to erase painful memories in offing

LONDON - Scientists in the US believe they may be able to help people erase painful memories with th...

WASHINGTON - A research team, including Indian-origin scientists, has introduced a new method to tar...
Copyright© 2011 The Gaea Times