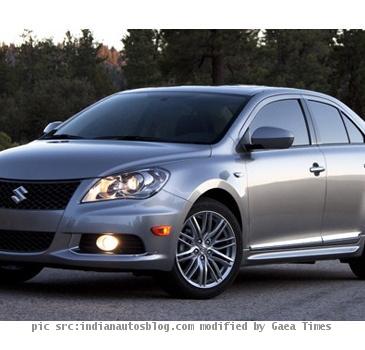 DELHI, INDIA (GaeaTimes.com)- Maruti Suzuki the car maker that has a large stake in compact car market in India is now vying for a share of the mid sized and premium car segment where its share is not much to talk about. In the last few years the growth in the mid sized car segment in India has prompted all major car makers to come up with new models and the plethora of choices available at attractive prices has intensified the competition among the companies in this segment. In Compact car segment Maruti Suzuki rules the roost with its Alto and other small cars from its stable like Ritz, WagonR and Estilo selling very well all over India. However, in sedan and mid sized car segment it does not score too well and some of its earlier offerings like Baleno did not succeed. The company is launching its much hyped sedan Kizashi in India next month according to the Indian auto industry veterans.

Maruti Suzuki spokespersons have said that the sedan will be imported from its home turf Japan. The Kizashi Sedan has already been introduced in USA and with it the company wants to make its presence felt in a big way in the premium car segment dominated so far by the likes of Audi, Skoda, Honda and Toyota. In India all the aforesaid companies have launched their sedans and have got good response. In comparison the Maruti Suzuki SX4 has got moderate response so far.

Maruti Suzuki Kizashi will lock horns with rivals like Honda Accord and Volkswagen Jetta in India. It is likely to be priced within INR 2000000.

PATNA - Hundreds of people who had booked cars for delivery on Dhanteras day were left disappointed...

CHANDIGARH - Facing resentment of players over being payed much lesser amounts than their counterpar...

RAI - It was a day for the players from Haryana to seek assistance from others to walk away with the...
Copyright© 2011 The Gaea Times