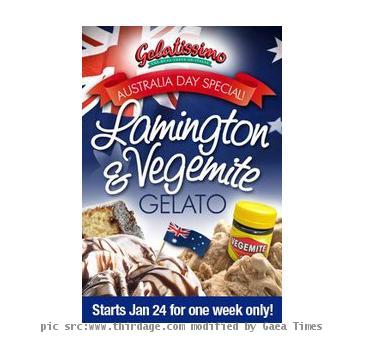 SYDNEY, AUSTRALIA (GaeaTimes.com)- There is a good news for the foodies who love gorging on vegemite. It is a favorite among Australians for breakfast. The spread is used with cracker biscuits, dinner rolls and toast. It is made from yeast extract. It is made and marketed by Kraft Foods Inc. dark brown in texture vegemite is slightly bitter. It is not as yummy as New Zealand or British Marmite. The delicacy is now available in an exciting new gelato flavor. It is being manufactured by Gelatissimo an Italian company which is known for offering various flavors of gelato.

Dominic Lopresti the co owner of Gelatissimo said on introducing Vegemite gelato, “Vegemite is quintessentially Aussie and iconic of the great Australian way of life , we decided to put an Italian twist on great Aussie icon to celebrate the beautiful harmony between the Australian and Italian cultures.” However, the downside is that the special flavor of gelato with vegemite will be offered only for a week. The last week of this month is the time the vegemite lovers will be able to buy this delicacy. The ads are already out.

Unfortunately for the residents of USA, they are likely to miss this opportunity. As of now Gelatissimo chains only function in countries like Malaysia, Italy, Singapore and Indonesia. However, the company has said in its site that it is soon going to spread its operations in other countries. However, the long time admirers of vegemite are not sure how it is going to taste in gelato flavor. The foodies can give it a try nevertheless.

'Neighbours' to get its first gay male character

MELBOURNE - So what if Octopus Paul has retired after the FIFA World Cup -- Australia's own psychic ...

Sexpo to be soon listed on Oz stockmarket?

MELBOURNE - Adult lifestyle exhibition, popularly known as Sexpo, could be listed on the Austra...

Online games and quizzes to test your travel IQ Do you know how many islands make up Hong Ko...

MELBOURNE - New Year's Day brings with it mighty hangovers, and many will be trying out diffe...

MELBOURNE - Kristen Stewart has Australian roots and she certainly proves it with her taste for ...
Copyright© 2011 The Gaea Times