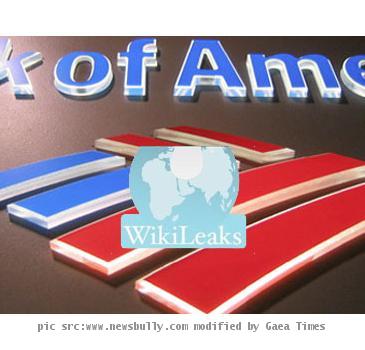 The Bank of America has announced today that it will stop handling payments for Wikileaks. This news comes in the wake of the incident after major get ways like Master Card, Pay Pal and Visa denied services to the site and subsequently faced a torrent of DDOS attacks.

In a statement the Bank said That

his decision is based upon our reasonable belief that WikiLeaks may be engaged in activities that are, among other things, inconsistent with our internal policies for processing payments

We ask that all people who love freedom close out their accounts at Bank of America,

We can safely say that the Banking Major is now a red painted target for the “Operation Payback”.

Rich Mogul, an analyst with the security firm Securosis in an interview with Yahoo Finance says that he believes that the bank was likely to have strong defense since it already was a high priority target. Considering the fact that they had waited so long after the other getways were attacked it is likely that this is Bank Of America almost calling out the attackers. We have reasons to believe that the security has been beefed up considerably. We also expect an attack on the said site.

TEHRAN - Tehran will observe a public holiday Wednesday due to "alarming" rise of air pollution in t...

TORONTO - The sales of the BlackBerry Torch 9800, which were initially hit by its high price, have p...
Copyright© 2010 The Gaea Times