About.me Gets Taken Over By AOL 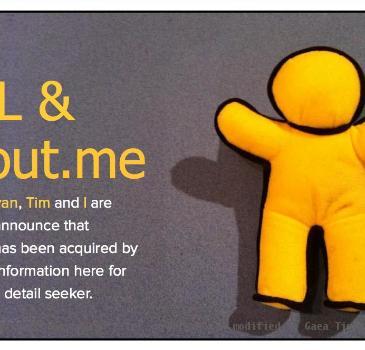 AOL went on with its plan of aggressive acquisition of the Personal Profile Startup About me just four days after the company went public. The result of this development means that it now is the part of the AOL Consumer application group headed by Brad Garlinghouse.

About me hence forth will be a sister concern of TechCrunch. The simple service did draw 400,000 people during the Beta testing period. The CEO of About.me had earlier sold off his last company Sphere to AOL. Tony Conrad was also an investor in Oddpost which was later acquired by Brad Garlinghouse in the redesign ventures of Yahoo mail. The team behind About.me are trying to come up with ways to integrate the product into AOL’s mail and instant messaging product services. The scale of the acquisition can well be in the tens of millions dollars. Conrad’s blog post states the event as

Ryan, Tim and I are thrilled to announce that about.me has been acquired by Aol. Whereto begin, there is so much to say but we’ll try to be informative, yet brief for today’s ‘get it now, read it fast, tweet it’ internet reader.

Ryan and Tim in question are cofounders Tim Young and Ryan Freitas.

I wish I could go back to the original Heidi, says Heidi Montag

WASHINGTON - Heidi Montag, who went under the knife for a marathon of at least 10 plastic surgery ...

GIRIDIH - A 37-year-old homemaker from a humble family here who is the first woman to win one crore ...

'Crorepati' woman to use money on kids' 'good education'

GIRIDIH - A 37-year-old homemaker from a humble family here who has become the first ever woman to w...

Armless Chinese pianist to take his skill on a world tour

NEW DELHI - An armless Chinese pianist is set to take his unusual skill on a world tour, showing o...

'I don't think anyone else will manage for 24 years, I'm a phenomenon': Fergie

I made terrible choices and repeated mistakes, says Tiger Woods

WASHINGTON - Love-rat Tiger Woods have opened up about his very public divorce by contributing an es...

Felton worked in fishery to realise value of money

LONDON - "Harry Potter" actor Tom Felton says he knows the value of a hard day's work as his father ...

LONDON - Singer Justin Bieber doesn't understand why he is so popular with fans because he thinks he...
Copyright© 2010 The Gaea Times