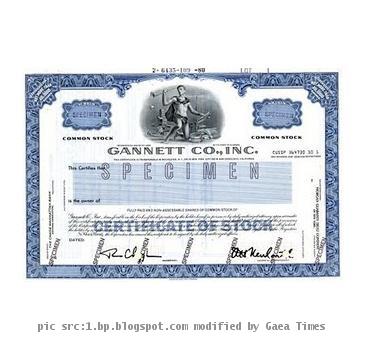 Gannet Co revealed todays that it is expecting a stronger fourth quarter earnings. It also mentioned that local and digital newspapers were benefiting greatly with improved advertising thus ensuring that the shares soar by as much as 5 percent. McClatchy a similar company also mentioned that the earnings are bound to go up for its properties which includes the Sacramento Bee. To the rejoice of the market its share also rose by 16 percent.

Gannett’s Chief Operating Officer Gracia Martore was confident and comfortable that the company was going to post earnings on a range of 72 cents to 82 cents per share per quarter. the executives also mentioned that they were positive about TV advertising as well. The New York Times also reported that the print advertising slowdown will decline. Gannetts shared at the end of the day was valued at $15.78, McClatchy shares were up 13 percent at $4.01.

News startup Ongo gets $12M from publishersNEW YORK â Some of the country's most prominent news...

USAToday.com's publisher will retire in November as newspaper looks for more revenue from Web

Topix.com agrees to drop fee to review abusive posts on website in deal with 34 states