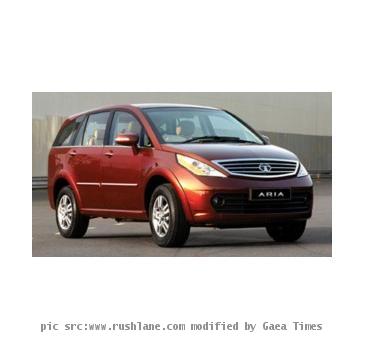 NEW DELHI, INDIA (GaeaTimes.com)- Tata motors is all set to unveil a number of new models in the near future for the Indian market. The carmaker has got a boost from the robust growth in domestic market and better than expected performance by Jaguar Land Rover brand. The company reported a net revenue of INR 1,989 crore in the first quarter of the 2010-11 fiscal year on a consolidated basis against a loss of INR 329 crore the previous year. The domestic sales were boosted by the rising buyer interest in the revamped Indigo Manza and Vista models. The Nano has also started rolling from its Gujarat plant and sales have started in select states. The company is likely to release its multi utility vehicle Aria by September this year.

As a matter of fact, Tata Motors launched its last MUV long back. The Aria is developed on the Safari platform. It is going to be a diesel car. The engine used in the model is the one that the company employs in its existing SUVs like Sumo Grande, Xenon XT and Safari. For the Aria which will have to compete against a plethora of rival models Tata Motors is likely to boost the power of the engine.

Tata Motors has equipped the Aria with some cutting edge features like cruise control, GPS navigation, ABS and airbags, EBD and ESP. The car can comfortably accommodate 7 people. The model is likely to be priced INR 1200000 upwards as the industry buzz has suggested. It will be pitted against rivals like Ford Endeavor, Honda CR-V and Toyota Fortuner.