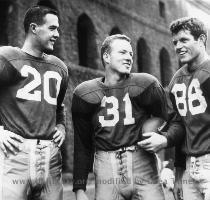 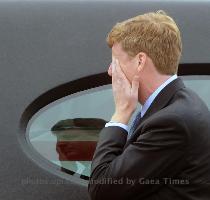 WASHINGTON — Sen. Robert Byrd of West Virginia, a fiery orator versed in the classics and a hard-charging power broker who steered billions of federal dollars to the state of his Depression-era upbringing, died Monday. He was 92.

A spokesman for the family, Jesse Jacobs, said Byrd died peacefully at about 3 a.m. at Inova Hospital in Fairfax, Va. He had been in the hospital since late last week.

At first Byrd was believed to be suffering from heat exhaustion and severe dehydration, but other medical conditions developed.

Byrd, a Democrat, was the longest-serving senator in history, holding his seat for more than 50 years. He was the Senate’s majority leader for six of those years and was third in the line of succession to the presidency, behind House Speaker Nancy Pelosi.

Sen. Jay Rockefeller, a fellow West Virginian in the Senate, said it was his “greatest privilege” to serve with Byrd.

“I looked up to him, I fought next to him, and I am deeply saddened that he is gone,” Rockefeller said.

The Senate Republican leader, Mitch McConnell of Kentucky, said Byrd “combined a devotion to the U.S. Constitution with a deep learning of history to defend the interests of his state and the traditions of the Senate.”

“We will remember him for his fighter’s spirit, his abiding faith, and for the many times he recalled the Senate to its purposes,” McConnell said.

In comportment and style, Byrd often seemed a Senate throwback to a courtlier 19th century. He could recite poetry, quote the Bible, discuss the Constitutional Convention and detail the Peloponnesian Wars — and frequently did in Senate debates.

Yet there was nothing particularly courtly about Byrd’s pursuit or exercise of power.

Byrd was a master of the Senate’s bewildering rules and longtime chairman of the Senate Appropriations Committee, which controls a third of the $3 trillion federal budget. He was willing to use both to reward friends and punish those he viewed as having slighted him.

“Bob is a living encyclopedia, and legislative graveyards are filled with the bones of those who underestimated him,” former House Speaker Jim Wright, D-Texas, once said in remarks Byrd later displayed in his office.

In 1971, Byrd ousted Sen. Edward Kennedy of Massachusetts as the Democrats’ second in command. He was elected majority leader in 1976 and held the post until Democrats lost control of the Senate four years later. He remained his party’s leader through six years in the minority, then spent another two years as majority leader.

“I have tangled with him. He usually wins,” former Sen. Dennis DeConcini, D-Ariz., once recalled.

DeConcini supported Byrd’s bid for majority leader. “He reciprocated by helping me get on the Appropriations Committee,” DeConcini said. Years later, DeConcini said, he displeased Byrd on another issue. “I didn’t get on the Intelligence Committee when I thought I was up to get on it.”

Byrd stepped aside as majority leader in 1989 when Democrats sought a more contemporary television spokesman. “I ran the Senate like a stern parent,” Byrd wrote in his memoir, “Child of the Appalachian Coalfields.” His consolation price was the chairmanship of the Appropriations Committee, with control over almost limitless federal spending.

Within two years, he surpassed his announced five-year goal of making sure more than $1 billion in federal funds was sent back to West Virginia, money used to build highways, bridges, buildings and other facilities, some named after him.