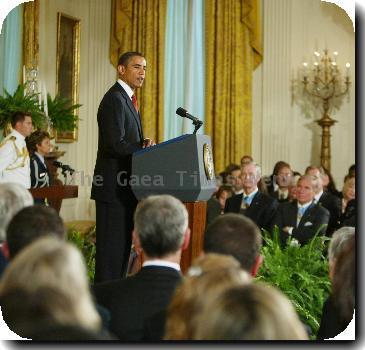 WASHINGTON — A crucial first Senate vote on President Barack Obama’s health care overhaul in a rare Saturday night session looms as a test of Democratic unity and the president’s prestige.

Democratic leaders are optimistic of success, but they need every Democrat and both independents to vote “yes,” and two moderates remained uncommitted ahead of the roll call, which is expected around 8 p.m. The vote will determine whether debate can go forward on Majority Leader Harry Reid’s 2,074-page bill to dramatically remake the U.S. health care system over the next decade.

Most everyone would be required to purchase insurance under Reid’s legislation, and billions in new taxes would be levied on insurers and high-income Americans to help extend coverage to 30 million uninsured. Insurance companies would no longer be allowed to deny coverage to people with medical conditions or drop coverage when someone gets sick.

The two holdouts are Sens. Blanche Lincoln of Arkansas and Mary Landrieu of Louisiana. A third centrist, Ben Nelson of Nebraska, announced Friday that he’d be supporting his party on the test vote, while cautioning that it didn’t mean he’d be with them on the final vote.

“It is not for or against the new Senate health care bill,” Nelson said. “It is only to begin debate and an opportunity to make improvements. If you don’t like a bill, why block your own opportunity to amend it?”

If that same reasoning holds with Lincoln and Landrieu, Reid, D-Nev., will have the 60 votes he needs to prevail in the 100-seat Senate. The 40 Republicans are unanimously opposed.

Landrieu has made comments suggesting she’ll support the move to debate, but Lincoln, who faces a difficult re-election next year, carefully avoided taking any public position Friday.

Republicans took to the Senate floor to slam the bill as a government takeover that would increase taxes and lead to rationing of health care.

“Washington will tell you what is good enough coverage,” said Sen. Mike Enzi, R-Wyo. “These insurance changes will increase costs for millions of Americans.”

Democrats said their legislation could make historic and necessary improvements in the country’s social safety net.

“Prices of health care are marching relentlessly upwards, and so too many people don’t have coverage,” said Sen. Byron Dorgan, D-N.D. “The purpose of all of this is to try to get a handle on it somehow.”

“This bill provides the necessary health reforms that the administration seeks — affordable, quality care within reach for the tens of millions of Americans who do not have it today, and stability and security for the hundreds of millions who do,” the statement said.

The action in the Senate comes two weeks after the House approved a health overhaul bill of its own on a 220-215 vote. After the vote Saturday night, senators will leave for a Thanksgiving recess. Upon their return, assuming Democrats prevail on the vote, they will launch into weeks or more of unpredictable debate on the health care bill, with numerous amendments expected from both sides of the aisle and more 60-vote hurdles along the way.

Senate leaders hope to pass their bill by the end of the year. If that happens, January would bring work to reconcile the House and Senate versions before a final package could land on Obama’s desk.

The bills have many similarities, including the new requirements on insurers and the creation of new purchasing marketplaces called exchanges where self-employed individuals and small businesses could go to shop for and compare coverage plans. One option in the exchanges would be a new government-offered plan, something that’s opposed by private insurers and business groups.

Differences include requirements for employers. The House bill would require medium and large businesses to cover their employees, while the Senate bill would not require them to offer coverage but would make them pay a fee if the government ends up subsidizing employees’ coverage.

Another difference is in how they’re paid for. The Senate bill includes a tax on high-value insurance policies that’s not part of the House bill, while the House would levy a new income tax on upper-income Americans that’s not in the Senate measure. The Senate measure also raises the Medicare payroll tax on income above $200,000 annually for individuals and $250,000 for couples. Both bills rely on more than $400 billion in cuts to Medicare.

The Senate bill was written by Reid in private negotiations with White House officials, combining elements of two committee-passed bills and making additional changes with an eye to getting the necessary 60 votes.

Along the way, Reid sweetened the pot for individual senators, adding federal funds for Louisiana and agreeing to support an amendment written by Sen. Ron Wyden, D-Ore., that would expand eligibility for the purchasing exchanges.